With the new coronavirus canceling Holy Week services around the globe, one of the most severe blows will be felt by Orthodox Christians. On the Saturday before Easter, which the Orthodox will observe on April 19 this year, thousands of pilgrims flock to Jerusalem’s Church of the Holy Sepulchre—the traditional location for Jesus’ crucifixion, burial, and resurrection—to witness the “miracle” of Holy Fire.

The historic church houses six ancient Christian sects—Greek, Roman, Armenian, Coptic, Syriac, and Ethiopian—which more or less cooperate in the administration of its affairs. By tradition, the Greek Orthodox patriarch enters the tomb alone, but emerges with a divinely lit flame. The fire is shared candle-to-candle throughout the expectant and jubilant crowd.

Eventually it is transported to Greece in a special container, and then on to Serbia, Russia, and other nations in the Orthodox world.

Despite the social distancing restrictions in place due to the COVID-19 outbreak, Israel is nevertheless facilitating a scaled-back religious ceremony. And to avoid quarantine, foreign dignitaries will receive the flame at their airplane after it lands and immediately return home.

Mentioned obliquely in fourth-century sources, the first Western mention of the Holy Fire dates to Bernard the Wise, a monk from modern-day France who went on pilgrimage in 876 A.D. Disputed by many, its popularity with Orthodox communities worldwide makes the Holy Fire one of the world’s foremost Christian celebrations.

Local Christians are known to chant in Arabic: “We are the Christians, we have been Christians for centuries, and we shall be forever and ever. Amen!”

Filmmakers Reuben and Brittany Browning grew up in Israel and Palestine as children of Nazarene missionaries, traipsing around the holy sites. As adults, they founded Cistern Films, with Holy Fire their debut offering.

Three years in production, the 27-minute documentary tells the story of the historic church through the lens of the ordinary Christians who maintain their faith and traditions despite dwindling numbers.

According to the Orthodox calendar, the Holy Fire ceremony will take place this year on April 18. CT interviewed Reuben Browning, who said he and his sister were keen to release the film prior to both the Eastern and Western celebrations of Easter.

Despite the coronavirus-related travel ban on Holy Land pilgrimage, they hope their film will provide a vicarious experience and shed light on an overlooked facet of global Christianity.

You grew up in Jerusalem. What was it like, having such a historic church in your backyard?

Entering the Church of the Holy Sepulchre almost felt like slipping through the wardrobe into Narnia. You go through these big doors, and it is an otherworldly experience. There are priest, nuns, and monks going around in processions with candles and smoke, with ancient languages being sung around you. I was awestruck.

You cannot understand the laws of physics in that place. There is a huge cavernous cathedral, then you go around a corner into a long corridor with steep stairs. There are caves. You get lost in a strange world.

So what led you to create this film?

That sense of wonder never left us, but as we got older we began to understand it better. When we enter the Holy Sepulchre as American evangelicals, we are reminded that we are a part of something bigger—a global religion that stretches into the far reaches of Russia, Africa, and Asia. And these rituals, they go back thousands of years.

We are just a small part of this fabric of Christianity. Our churches wouldn’t exist if it wasn’t for what they fought for over the centuries. Even though our patterns of worship and church spaces are very different, it was very important to understand this richness.

We wanted to tell the story of the Holy Sepulchre, and their most salient moment that takes place at the Holy Fire ceremony at Easter. It is an incredible church that needs to be shown, and we wanted to create the experience of entering it. 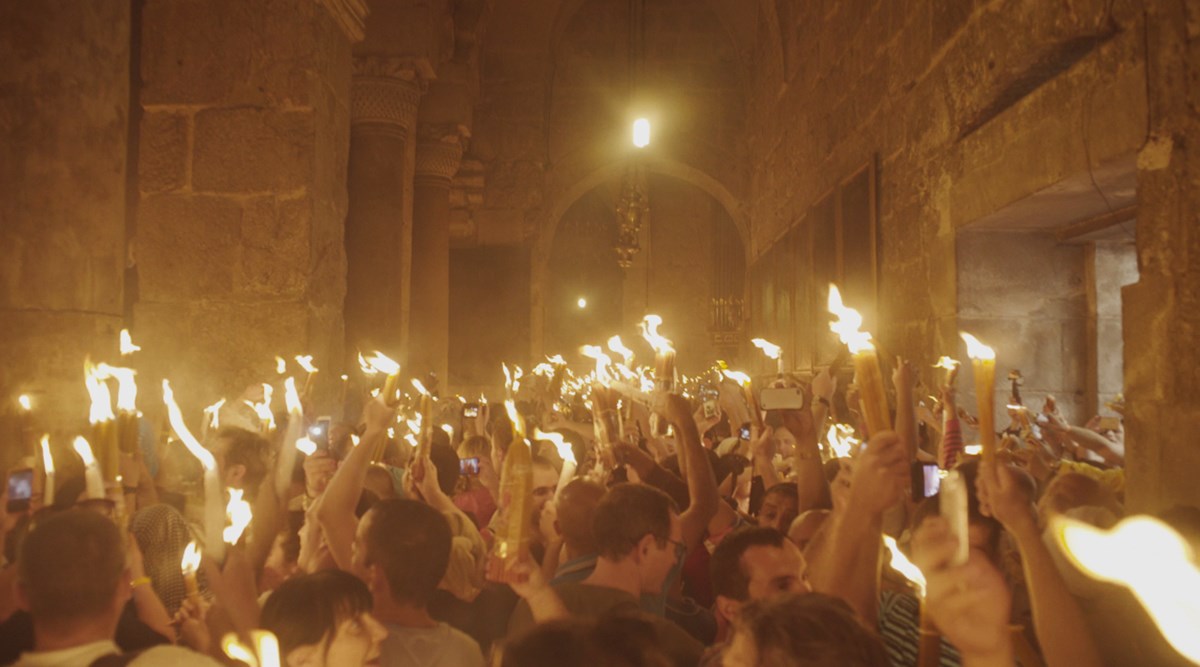 The Holy Light part of the ceremony

What was it like as an adult being in the middle of this mass of people?

It was equal parts terrifying and amazement. Filming it, I thought I would have a panic attack. Tens of thousands of Orthodox Christians come from around the world. They lock the doors, everyone is shoulder-to-shoulder, and you wait and wait and wait for the divine light. You can be in there four to five hours, fearing for your life. But it is also a sacred space, and people are bawling from the emotion.

You really are jammed in, with everyone shouting different languages. Your instinct is: Are we going to survive? Is there enough oxygen in this church?

Eventually, by force of inertia, our other two camera people got pushed back and back, so that when the flame emerged they were already at the edges. I was right near the front, just trying to hold the camera without passing out, going against the flow as everyone leaves the church. There were beautiful moments of everyone holding their flame as it was passed around. I followed one person because his candle was so beautifully lit. I wanted to interview him, but I also didn’t want to interrupt the moment.

What impact is COVID-19 having on the community?

It has become a season of lament for them, since it is such a high point on their calendar. Israel is working with them to disperse the flame throughout the world, and also to ensure that local Christians can receive it in their homes. So while they are still looking forward to getting the Holy Fire, it will look a lot different this year.

And economically, that area of the Old City really depends on the tens of thousands of pilgrims coming in. Rooms are booked years in advance. It is a high time for shop owners and hotel operators, so it is a real financial hit for them.

In the film, there is a small segment that touches on the political realities of Jerusalem, highlighting the Palestinian perspective. What else might you like to add to put these dynamics in context?

We originally were thinking of making a two-hour film that would touch on many aspects. We had a segment on Christians that are united for Israel. We know a lot of people have a strong connection to Israel as a Jewish country, and we weren’t trying to alienate anyone.

At the same time, we couldn’t overlook the realities of the situation for Palestinians. It wouldn’t be fair to say to them, “We want to see this beautiful church, but don’t tell us about politics.”

There are certainly many landmines we could have touched on, but the issues are so polarizing, we didn’t want anyone to write off the film as being too one-sided.

Even so, local Palestinian and Arab Christian communities say they often don’t feel solidarity from Western Christians. This is not a political film, but we wanted to tell their story.

Why do American Christians sometimes miss this reality? What do you want them to understand from this film?

We wanted people to connect to these traditions, even if the Eastern rituals are not what they are used to. A lot of American Christians come to Jerusalem and choose not to go to the Holy Sepulchre, but to the Garden Tomb instead. It is a lovely space, run by wonderful people, and it is certainly a place where you can go and meet God.

But it is also an idealized space of what we would like the tomb of Christ to look like. It is easier to contemplate the death, burial, and resurrection of Jesus in an open-air tomb that is peaceful and calm. Many Christians who have gone to the Holy Sepulchre on tours have not liked it at all.

We wanted to give American Christians the chance to experience it as a pilgrim would: as a holy site. One interviewee told us that Western Christians do not acknowledge that Christianity is an Eastern religion. We wanted its origin to be a lasting point in the film. 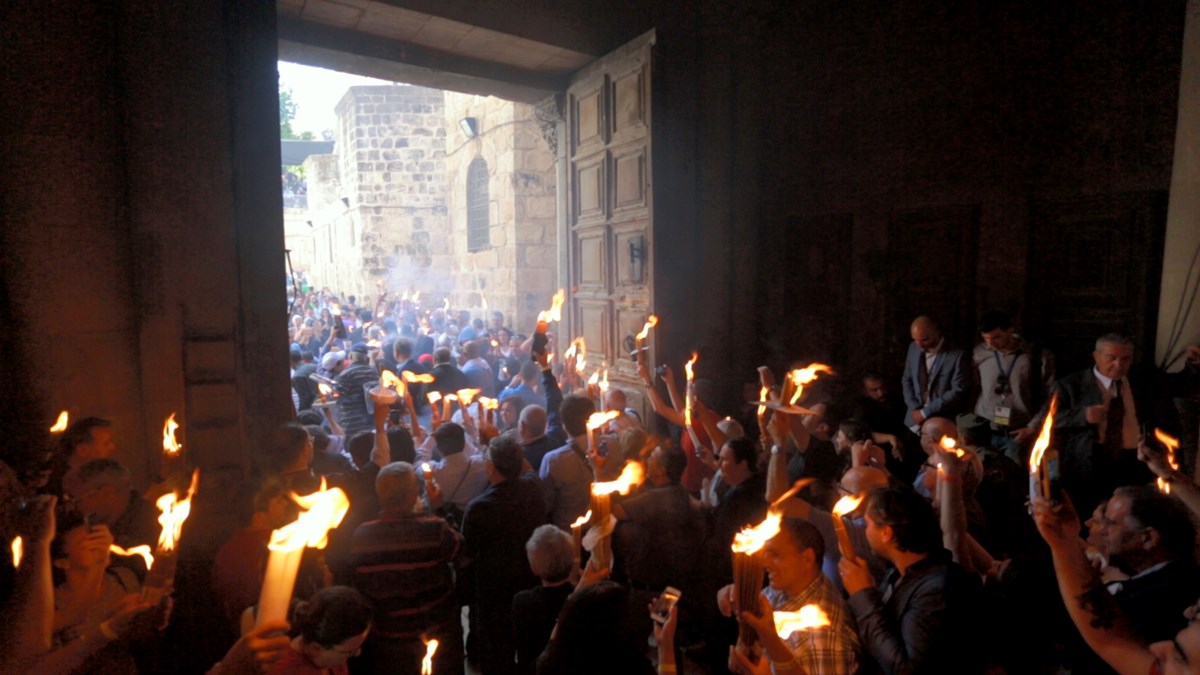 Leaving the Church of the Holy Sepulchre

This Easter, American Christians will be experiencing a very different holiday. What does this film communicate in light of the new coronavirus?

The Holy Fire ceremony is on Saturday [April 18], the day before Easter [for Orthodox Christians]. It is the moment when Christ is already gone, and he is not yet risen. You are in this dark place where it feels like God is not there. You’re confused. And then there is a small flicker of light, a flicker of hope.

This is a very timely image, with so many people around the world at home, suffering with so much darkness and confusion. The film offers an understanding of how to celebrate Jesus’ resurrection and return.

We want people to watch it, and experience a little bit of that Easter hope.

Holy Fire is available for rent or purchase at Amazon and Vimeo. A teaser and trailer can be watched on Vimeo.

If you think racial equity exists in America today, you’re in the minority – Baptist News Global